i cant help myself im a tinkerererer , not had this long but could see faults with it, no doubt others will be the same, or i had a bad one?

the main thing was the paint flow trigger movement wasnt smooth it felt a bit gritty like it was loosely grinding on things.
so i stripped it down and had a look at the spring assembly sleeves and there was round ringed scratches around it like theyd been told you can make them for us but make sure there not too smooth so give them a scrub with some p600 on assembly
so i wrapped a strip of p2000 around the raised part and very lightly spun it with my fingers using very little pressure, then once most of them had been sanded out i buffed it with silvo/brasso so it was pretty smooth, you can still see its not 100% but i can always give it another light buff. see neo-trigger-inner-pin.jpg

i also very gently took the bottom edge off the rocker , extremely lightly,i hardly touched it, just to take any roughness off as it pivots on that edge inside the brush. see neo-trigger-inner-pin.jpg

on the outer sleeve of the spring section there was scratching inside of it so i rolled up some p2000 and slid it inside the tube until i felt it hit the end ridge and gently spun it, keep taking the paper out and giving it a clean aswell as inside the tube so your not adding any scratches, once its smooth i gave it a clean up with silvo/brasso , or you could use toothpaste on a cotton ear bud.see neo-trigger-sleave.jpg
do the same to the other end as i didnt at first and could still feel it a little
i thoroughly cleaned all of the spring/trigger assembly and then lightly lubed it


i could see the end of the pin on the airvalve was scuffed up, so was the ball on the trigger so i very lightly sanded the tip of the pin smooth and also took off the sharp edge as shown in the pic neo-air valve.jpg

the slot in the trigger that the needle goes though also had slight burs on the edges, chances are that doesnt matter but due to the slight looseness of the trigger left/right movement they might touch the needle so i gently sanded inside the slot with some p1500 then p2000

on the actual airbrush itself i just used a cotton ear bud that i rubbed round the silvo so it went pink to just clean up the little slot that the rocker plate pivots against, other than that i didnt touch the gun itself.

as always, go slowly and lightly and you do so at your own risk but its pretty safe aslong as you only use a very fine sandpaper, but your neo might not need it, mine did

i hope this helps someone 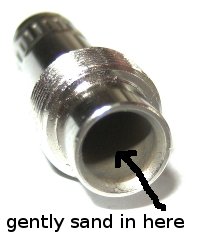 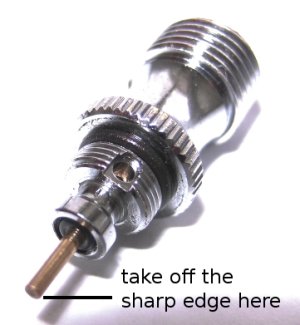 Thanks for this but your photos are so dark I can hardly see them.
Got any lighter one's please?
C

il see if i can take a few brighter ones, it was a nightmare with the flash on

edit: just changed them
Last edited by a moderator: Aug 9, 2012
You must log in or register to reply here.

Thayer&Chandler Trio 1 model B and 2 model A

New Additions To My Toolbox