More than one airbrush? What do most people clean their airbrush with? Paper towel?

Typically, what is the reasons for having more than one airbrush? I have an iwata hp-cs and love it. I noticed the siphon feeds come in packs of 6 so that you have an airbrush for certain colors. Then there are airbrushes for extreme fine detail. I was thinking, I love my iwata, & thinking of buying a badger patriot for no reason just to try it cuz they aren't that expensive. Maybe I can keep my iwata in better shape using the patriot as my workhorse. Also, what do you clean your airbrush with. For example, when I am about ready to switch colors, I use paper towel and wipe all the excess paint out of my gravity feed cup. I noticed the little fibers, maybe I should stop using paper towels. After I wipe the access paint, I pour clear window washer and dump it twice, swish my paint brush inside the cup to loosen and dilute the left over paint, and then put a few more drops of cleaner, & spray a little out of the nozzle, take my brush and swish a little cleaner on the front nozzle and needle, spray it again to spray off any tip dry that the brush loosened, then load a new color.. -

I have a hp-cs and use it for everything, and since christmas as I was lucky enough to get another one, I now have two! It's just great to be able to have more than one colour on the go at once, and saves time, particularly of you are only using two colours such as black and white. I see vids of guys with loads of guns for many colours (usually t shirt guys), but I don't like siphon fed guns, and I definately don't like the idea of cleaning them all LOL! I've never used a patriot so don't know what they're like, but badger are a good company. I love my iwatas though, and wouldn't be without them. (they are called Trusty and Truely, I really am a sad case!!!)

If you are getting fibres left behind in the cup, then I would stop using the paper towels. I use a fibre free cloth, and just water. But your way sounds fine, you'll soon know if it isn't if your nozzle blocks up anyway. And just FYI, try not to be too rough on the inside of your cup as over time the chrome will wear away. My oldest gun I've had for about 15 months, and it barely has any chrome left (possibly because I was too heavy handed to start with, rather than a gun defect). It can make it harder to clean, but if this does happen, wipe a light coat of lube (make sure it is specifically for airbrushes..) and it will clean like a dream.

Typically, the reasons for having more than one brush are as you mentioned... Some are all around workhorses and some are for details. The HP-CS is my primary workhorse as well and is capable of very fine details. I own three of them (another reason to have more than one brush... it's always good to have spares just in case). The Kustom TH falls second in the the most action category because it covers large areas very fast and my Micron's only come out for very fine details on smaller pieces. And there's nothing wrong with purchasing another manufacturers brush to try either... You never know, you might like it better.

As far as cleaning goes, it sounds like you have a good system. This is another area where there is no right or wrong way and I'm sure we all do it a little differently. I do use good quality paper towels (I've found you get what you pay for with paper towels) for cleaning my paint cup and have never had issues with it leaving lint behind... Also, be sure the window cleaner you're using is amonia free. The amonia will eat the chrome out of your cup as Squishy said above.

Thanks all! I use ammonia free window cleaner and we only use bounty paper towels.. I haven't has issues with lint in my airbrush, but trying to prevent that before it happens.. I think I'll switch to microfiber rag and thank you for telling me to be careful with how hard I wipe in there.. I really am the type of person that likes to keep my stuff in pristine condition and I would really be hating myself if my chrome started coming off.. I'd probably just buy another hp-cs. I bought mine at the hobby lobby with their 40% coupon for $116. Came with some com-art paint too.. 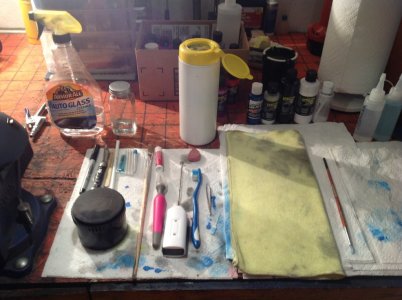 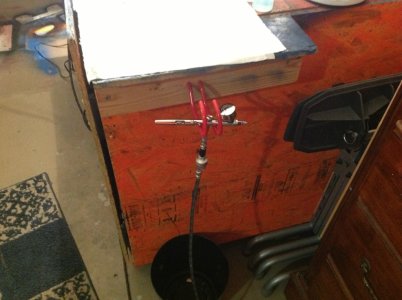 I hate to tell you this, but... eventually the chrome will wear off inside the cup if you use it long enough. The good thing is, it won't affect the brush's performance at all! The chrome has been gone for years in all but one of my airbrushes.

, i have 12!!!! for absolutely no reason what so ever!!! mine are pretty much for the same reasons as above. almost all of them serve a certain purpose and they are all 4 different brands. 3 iwata, 4 badger, 3 sata and 2 devilbiss dagr's. i have worked out a system that certain brushes are for illustrations, automotive. some are for hard surface, some for paper. some are strictley for urethanes and some for water based paints. i clean them when using water based with amonia free windex and urethanes i use reducer or thinner.
All i know is a bomb could blow up my house and odds are i would still have an airbrush to paint with, !!

otpowell said:
Thanks all! I use ammonia free window cleaner and we only use bounty paper towels.. I haven't has issues with lint in my airbrush, but trying to prevent that before it happens.. I think I'll switch to microfiber rag and thank you for telling me to be careful with how hard I wipe in there.. I really am the type of person that likes to keep my stuff in pristine condition and I would really be hating myself if my chrome started coming off.. I'd probably just buy another hp-cs. I bought mine at the hobby lobby with their 40% coupon for $116. Came with some com-art paint too..

My wife says that your pristine organization skills of your work area is a thing of beauty!!! you teach me to do that, and ill help you with airbrushing!! my room looks like that bomb already went off!!!

Lol, thanks seamonkey. You should see the rest of my garage if you like that.. I love my garage.

thats what im talking about!! if your gonna do it, go all out!!! wish i had a garage that was usable for something other than storage, i have a spare bead room, !! i swear my kids have more crap than i do, !!

Admin
A clean garage is the sign of a sick mind....that is all I am saying...
My garage is full of tool boxes, cars ,tractors , lawn mowing equipment , But my man cave is my paint area..
Last edited: Jan 13, 2013
W

I have a gravity feed Neo and a bottom feed paasch, I got to the point of using the paasch for thicker paints and the Neo or thinner,
The Neo has very small access into the paint well so I use those little dental brushes they look like mini bottle brushes I like mean green lemon scent ( can't stand liqourish smell of the green) works very well breaking paint up wet 10/1 and 1/1 in a small coffee can to soak my tips also have some toothpicks and numerous sewing needle. You don't need a prescription to buy syringes I got a pack of insulins for under three bucks from Walmart cut the needle tips out and use them for hard flushing and paint mixing also use a dental syringe has a long plastic tip 100cc barrel to flush with
Oh and paid eight bucks for one of those baby care kits got the eye dropper, nose bulb, medspoon and junk the medspoon looks like a oversized eyedropper the tip fits perfect into the barrel of the paasch
Last edited by a moderator: Jan 13, 2013

I use the cheap perforated dish washing cloths. I don't experience any fiber strand staying behind.

After I painted or between colour changes, I back flush. Toss extra paint. Add some water. Back flush again. Toss dirty water. Wipe bowl out. Fill with cleaning fluid (Windex and water mixture). Spray through but leave a bit in the bowl. Whipe out bowl. Fill with water and spray through to get rid of cleaning fluid. Works lile a charm.

I don't have the luxury of then one general purpose gun, but with my side feed I have multiple cups.

Thanks for the tips all.. I have some syringes in my garage. Never know when those might come in handy.. I think the sewing machine needle would work well for cleaning those tiny air horses in the nozzle cap.

We sell the bottom feed brands in multiples because many T-shirt artist in particular use a brush for every color .
i always say one for black one for white one for light colors and one for dark colors . You can use one for shirts
but it is not easy to clean the thicker t shirt paints out of the guns . They are thick so they cover and have enough binder to stay in the shirt when washed . Urathanes do clean much better then most enamels or water based paints .
Even when using water based cleaners there almost always seems to be some hard to get out paint .
Createx makes an awesome product we sell here at coast airbrush called restorer for just that !
We sell and use the blue shop towels that you can get at Cosco for a really good deal !
they won't leave any lint behind . For gravity feed airbrushes I use and love these hard Bristol cleaning brushes
sgs-3E on this page of our site .....Coast Airbrush Products
i use this all the time to help break up the paint .
I

you can by cleaners and cleaner kits i got a iwata table-top cleaning station it includes airbrush hanger, filter and a 24oz (700cc) container
its really good the companys website is

Thanks all, I do have some createx airbrush restorer. I just ordered some HOK paint and going to give that a try on some plastic.. I ordered some duplicolor adhesion promoter, HOK candy base coat kit, and white and black base coat.. I'm planning to use acrylic automotive clear for a clear coat once it is painted.. I think all I need now is a respirator and some lacquer thinner to clean the paint out of my airbrush. Was thinking to try krylon plastic spray paint to use for a primer. Guess i wouldn't need the adhesion promotor if i did that? Still have questions but I am sure I will figure out what not to do once I start painting it.. I proally going to buy that 2k clear soon too that comes in a rattle can.

Also, House of Kolor will not warranty their products unless you use their system exclusively on a particular project. Taking short cuts (i.e. rattle can) is a recipe for disaster. It has been done successfully, but more often it is not. Learn the rules confined to a system before experimenting with how to break them.
You must log in or register to reply here.

New Additions To My Toolbox