Basically, I started playing around and was really excited about the idea of getting my first airbrush. So I did the exercises on airbrushtutor.com and watched more then a few videos on different techniques. My first try at a free hand with a free hand stencil that came with the starter set is the skull, the only thing i used the stencil for was the flames. my second attempt since i want to paint welding helmets automotive etc was an airsoft mask I had laying around and decided to take a swing at true blue frames. Now, I'm wondering if anyone can give me advice or if you can give me your thoughts? I started airbrushing on monday. 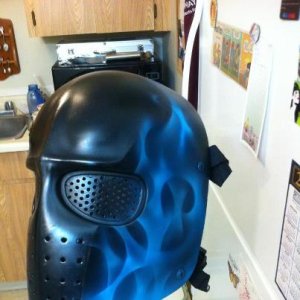 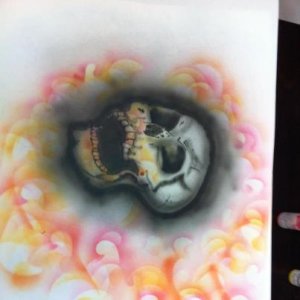 As a fellow newbie, I don't have much advice, but the helmet looks pretty cool to me. The only thing I might say I noticed about the skull is that the flames look very stenciled... I don't know how to quite explain it.... maybe that it looks like you might have use the stencil just a little to much so the flames don't have enough randomness.... I don't know.... I'm struggling with flames myself, so I'm not the best to offer advice, but it all looks good to me. Glad to meet a fellow newbie.

Your skull seems to be to dark and have outlines. Kind of like a cartoon has the black outlines where it was drawn. You don't really want that as you go forward. Work lightly and blend you black, fade it lightly to the darkest points of the shadows. There is almost nothing straight on a skull that had a straight sharp line, everything is rounded and that's where the fades with create the shape and depth at the same time.

The blue flames look way better. You have to much stencil mixed in there. Do a loose free hand deaign and then find the curve of the stencil that fits the curve of the stencil size and just spray the tip or peak of the stencil. Right now It's the whole round part of the stencil and doesn't really flow like a real flame. You also can go over them with a sky blue color then a little white and that will bring them out to give depth. It takes a ton of practice to do flames really good and I'm not great at it but I can do them pretty good.
If I get time I will try a little how to on them the way I do them. You have ago of start because I can tell it is fire and I have seen some that I had no clue it was a fire attempt, !!! Keep going, and you will get it, for less than a week you have made major progression from the total newbie stage!!

Ya, I watched a tutorial a while before and kinda winged it with the blue flames haha, and the skull was i guess an AB version of doodling. i appreciate the advice though guys i just jumped back into art after 12 years so this is going to take some getting used to again haha.

No problem! That's why we are all here, to learn to be better. One thing is for sure, it won't take you 12 years to do some real quality work, like I said you have a great start going there!! The first 5 things I ever brushed were flames, !!!

i just made myself some stencils to practice with but i dont know what i should be practicing on. paper? metal?

practice on it all paper is good and cheap metal is good cause it lets you know the challenges of painting on a hard non absorbant surface.
S

The best advice i can give you is learn to blend, make good shadows, and learn how to control the airbrush without getting doll lines and blends. airbrush on to the biggest surface you can, there you can practice detail work when the detail doesnt get that "small"

Try also not to use the stencil as much, altough its a great tool, but overworking it is easy too see. happy airbrushing
H

Im a newb also to the art

My advice is to practice on the basics first, this site has some great content and my work in two weeks since joining up here has taken a massive leap forward from what i was doing previously.. I purchased a couple of videos and played them over and over again and found the harder i try the better my work is... it doesnt just happen.. great start keep practicing you will eventually find the more you do the better you get and you confidence will grow with the more work you do. I now find each piece i do is better than the last piece and improvement is happening all the time... keep going
H

I find I have to block out everything to get a good piece. I find if I force it, it doesn't happen. I'll typically put on some headphones and zone out of life. But the girlfriend had a go at the airbrush she has way more art experience then myself. I'll give you guys a peak. 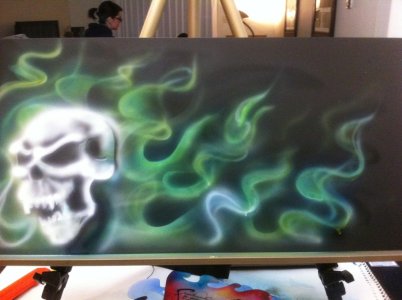 J
New to this site

Greetings from the Netherlands