Problems With A Pegasus

Hi all I've been trying to do a Pegasus design on a computer case I'm using a homemade stencils off of a picture I had down loaded. I get everything cut out and when I place the stencils onto the case I'm working and after I lay down some color to it and I always end up with the lines in between the area's I'd painted. So my question is what in the blue blaze's am I doing wrong. I'd thought about taking some turquoise and go between the wings as an out line but then it will look like something that was left in the old crapper house. 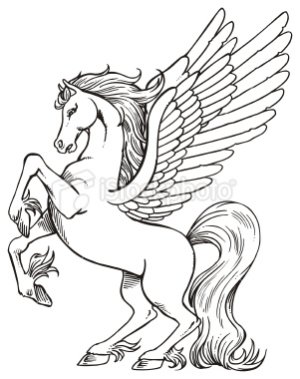 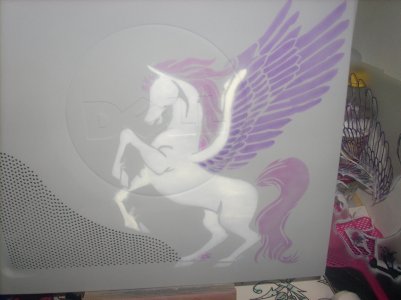 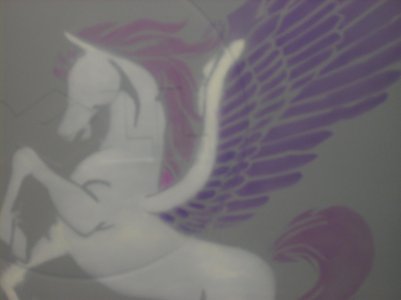 So do you have any suggestion for me to do so I can get away from the stencil looks. And Thanks In Advance
M

I'm not entirely sure what is is you would like to achieve, however I'll go out on a limb and assume you would like to get away from the line drawing appearance of your reference image, and that you would like something that is a little more realistic with some degree of depth and including muscle tones and that sort of thing.

If that is the case, I should point out that the only way to avoid the stenciled look is to avoid using stencils, or at the very least to make it less evident, I personally would only use stencils to apply a light mist to get my proportions right, I see that you have cut your shapes out of the stencil leaving behind the line drawing part of, this would have been more successful on a black background.

If I wanted to do this myself, I would have cut more stencils, the fist of these would have been a stencil the shape of the whole image to the perimeter, using this I would spray a light mist just enough to be able to see the shape of the whole image, the next stencil would show the key points, the lines of the wings, wing root, mane tail including a little hair detail and eyes and hoofs, again I would spray very lightly with black or a dark colour enough the see the key shapes, the rest of it O would simply freehand, although i would reuse the first stencil to avoid unwanted over spray.

On the wings you sprayed the lilac evenly, this would have been more convincing if you had blended going from dark on top to lighter on the bottom, this would give some depth and form.

I would suggest looking for a reference that is closer to what you seek, although I generally look for more images that can study for important details, unless you have Pegasus in your back garden, , it's hard to produce a 3D looking image out of your head.

Basically the process you would use is similar to that for doing portraits.

Rather than just putting a block of colour into each area, add some detail and shading, you won't completely get away from the stenciled look, bit it will make it look a lot more individual, and bring more life into it. If you painted the areas in between the different stenciled parts and tried to blend it in, it would help bring the whole thing together too. It will also be a great way for you to get used to using different effects ready for when you want to move on from stencils.
J

Another idea is to cut out just the outline of the wing, then cut out a shield, and spray lightly along it's edge, starting from top of the wing to the bottom, which should give the impression of feathers overlaying each other!!

Admin
Mainly I think you are looking to add depth to this design.
When using a stencil you have two ways to go about it . One is dust in the stencil design than come back after removing the stencil and free hand it.
The other way it to hit only the brightest spots of the design and let the over spray make up the shadows and depth of the piece .
But you have had a lot of great comments to pick from and try.
G

Thank you all for your input info. Madbrush you pretty much hit the nail on the head and the background is going to be a night time scene and where the center of the cases I planning on using the center where the dell is located at will be the moon. I'm still learning the ropes on this about the shadowing and getting more realistic looks. That's why I decided to ask for help on this I had tried and tried until I gave myself a big time headache. But once again Thank you all for your input and all Hope you have a great weekend at least what's left of it.
You must log in or register to reply here.