Skull and flames... new to airbrushing and looking for advice

Hi everyone. I'm kind of new to airbrushing, and new to this forum, but thought I'd kill two birds with one stone and intro myself and seek advice in one post. So long story short, I picked up a Paasche VL a few years ago to help me put sunburst fineshes on guitars I was painting for a local builder. He moved to Nashville to be closer to the "music scene" and I put the airbrush away, figuring I'd never need it again. About a month ago, a friend asked me paint a bunch of shirts for her for when her son was born. I took the gig, grabbed the airbrush and painted a few hearts, the babies name, nothing fancy, but she was pleased and from her referral, I got more tshirt jobs.

Then as I was talking to some guys at work about it, they both asked if I could customize their motorcycles over the winter. I said sure, and then realized I would need to practice A LOT!!!!!!! So for the past 3 or 4 weeks, I've been painting every night, watching youtube videos, reading the forums, and then painting some more. Having a blast, but could really use some advice on an issue that is causing me a lot of frustration.

In the pictures, the flag and flaming skull was my first attempt at flames about two weeks go. They are not good. The flames are not defined and the colors are awful. Then there is the other one on a small money box that my wife and I had around the house. Everything came out a lot better, and I'm happy with the noticeable improvement, but the flames themselves are still a struggle. I think its over spray, but being a relative novice, I'm not positive how to correct it. around the flames its all grainy and it feels like the edges of the flames could be more well defined. I see some of the pics from the veteran airbrushers and am amaze at how sharp and crisp they can get their flames and am wondering what techniques I can practice that would really help get the flames better defined. I mean every night I fill several sheets of paper with dagger strokes, dots, lines and shading, and maybe as my skills progress, I'll keep seeing improvement, but it just gets so frustrating. Any help, pointers, or advice would be really appreciated.

I am researching other brushes, (leaning towards the Krome), but for now its the Paasche. All the paints are just a mix n match of plain createx and spectra tex. Was wondering if better quality paints such as Wicked my help knock down some of the over spray too, but so far, for the learning curve, I'm just picking up whats available at the craft stores in my town. 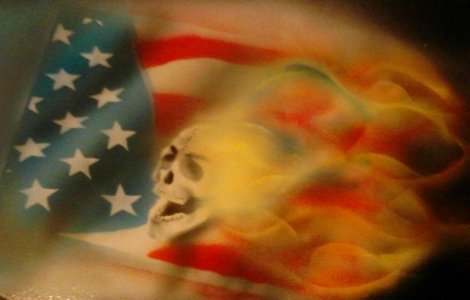 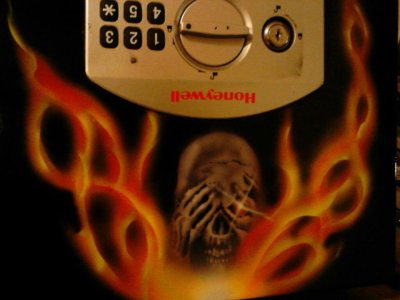 I want to be forever young.
What you're tackling is extremely advanced Jason, i'm trying to pioneer my own style of freehand flames which are basically the same thing as true fire or real flame which have been done a million times but it's a whole new name.
i started a thread a while back challenging myself on this and in my whole airbrush career - this has been the biggest challenge. When you paint flames from a reference, they tend not to turn out like real fire. it's a definite airbrush only exercise that takes practise only - i'm trying to find a way to actually teach it but only the colors can be taught easily.
http://www.airbrushforum.org/general-airbrush-discussion/486-my-weakness-true-fire.html

Enough on that - you also want to know how to get sharper lines.
This does depend to some extent on your equipment and paint - you'll always get overspray, however sharp lines come with confidence and confidence comes with time and practise. To speed up this process choose an image you'd like to try and paint - may i suggest the skull reference from the current competition. Paint a picture of it from A2 size all the way to A6 or even A7. Just this one exercise will teach you plenty as you try to achieve the same focal values at different heights - this would take around 4 days of full time airbrushing in itself.
have patience and keep up the practise with the lines and dots my man.
F

Thanks so much. I will take your advice on the skull challenge.... looks like my weekend just got filled. . FYI, your teaching style on the vids is great. I've really enjoyed watching them and keep going to back to watch them again, trying to pick up more tips as my skills progress.

welcome!!! and keep going with the airbrush, you have a really good start!!! mine really sucked!!!!! practice is the best medicine and you already know how to do that, hope to see some more work here soon!!

Welcome aboard, looking forward to your future work
S

Hi and welcome to the forum

OK look I do flames all the time and when I first started doing them they looked like poop. Practice practice practice!!! Mike Lavallee's video helped me allot allong with his stencil set but it's easy enough to make your own. You tube has a ton of videos for this also. Createx even has a video on there website on how to do real fire with wicked paints. you can use image's from killerpaint.com for referance on the effect. One of the tricks I have learned is stay loose after you get how to do them they are fast and easy to do. So don't give up or get frustrated, keep it up you will get it just got to work at it. Oh yeah the curves you are using are too big cut some out of a manilla folder different curve shapes. smaller and bigger radius.
Last edited: Sep 13, 2012
A

I would like to tell you my technique but then I will have to kill you. Welcome aboard
S

practice is the key, look for good references
S

Id just like to have a technique to tell you...... the only flames Ive done that sort of worked i haven't really been able to replicate.....Doh.....welcome and good luck

Ive only done true flames once, and it was quite an experience but I really enjoyed it. Just havent had time to go back to it. As some of you know, Im DIFFERENT, haha, I do things backwards most of the time, so why should my flames be different. I start with my lightest colors and work to my darks, yup, bassakwards I know, but hey, it works for me. Here's a lil step by step that may or may not help you. If you choose to go from dark to light, just start with the last pic and work your way back to the first, excluding the solid white at the first of course, .

This was all done with Waterbased/Waterbourne Paints: Wicked & Auto Air and with a Badger Patriot 105 airbrush 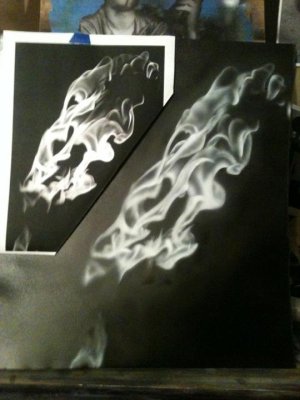 Step 1: I laid down Wicked Detail white for my base (Definitely using a reference as Ive had no experience with true fire) 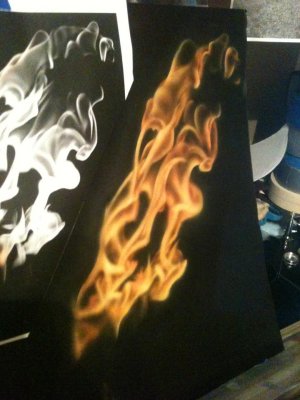 Step 3: Started putting Auto Air Candy Orange where the shadows were, leaving the Yellow as highlights

Step 4 & 5: I didnt get separate pics, but then I used Auto Air Candy Apple Red to darken the orange I had just added. Then came back in with Wicked Black to cover any over spray and to darken certain areas to make them look deeper. Then a quick shot of rattle can 1k clear (because that was all I had, I didnt buff it or polish either)

This wasnt any certain technique that I used, Ive watched true fire videos for over a year before I decided to try it, then I just did what felt comfortable to me and it turned out okay.

Hope this will help you in some way.
S

Looks like they work to me. Backwards or not the result is what matters. There is always variations to techniques and I think this is surely a valid variation to a technique as the result shows. Great work and cool step by step instruction well done 
R

thats sweet, you make it look so damn easy
F

Russ, that is really cool. Since I did this painting, I've improved a lot, but I think I'm going to try doing it your way. It may or may not work for me, but I think trying something different will help my overall knowledge... and right now, besides practicing as much as I can, I'm trying to gain as much knowledge as I can. Thanks for the nice step by step
R

Thanks guys, much appreciated! My way is in NO Way the correct way, its just the way I got the results I was looking for. I know its different for everyone and all you can do it try and see what works for you. I did a quick step by step on it because I thought it may make it easier for others, as I was always leary of trying fire, I just couldnt grasp the technique, and everyone does it so differently. Dont get me wrong, its not like I whipped this flame out really fast, it took time, about 2 hours in 4 settings, , didnt have much time to work on it, had to wait til' the kids and wife were in bed. I spent the most time laying out the white to be as close to the reference as possible, once you got that down, its fairly smooth sailing......

There is one step I forgot to mention, I used a hairdryer in between every coat to make sure the paint was cured good. Give a try and I hope it helps someone!! Good Luck

Looks really cool Russ thanks for putting this up mate!

i have already told you on the other forum how awesome this is, but if you would like i will say it again!!! also tell everyone how freaked out you got when you lost the refrence pic in the middle stage of it, LOL!!!! turns out you didnt need it, cause i think it looks better!!!
R

Thanks Mitch, really appreciate that!!

Damn Josh, you got a better memory than I do, ! All I had for reference was the black and white photocopy you see in the step by step. Thought I had saved the reference photo to my laptop but it was no where to be found so I was just wingin' it for the color!

Like I said , it turned out better than the reference any way!

Thanks Josh, I appreciate that! Theres flaws in it you cant see in the pics, but Im proud of it! Just gotta get some time to throw some more flames. Been too sick the past week to finish my space scene and wondering if I will even have time for the skull competition, maybe not, we'll see
You must log in or register to reply here.

T
New to the forum and looking for technical advice

32 minutes ago
Tapper
T
L
Getting to the point