I was asked to paint some walls for a customer, semi gloss walls. How to prep them? and when I'm done do I clear the whole wall or just the image. He is looking for a yin yang and some kanji on another wall. Do I need to sand the walls or just light coat them? I'm using createx and spectra tex.

Thanks guys and glad to join a forum with other brushers, I am an absolute loner way out here in my neck of the woods and only have onliners to talk too.

Admin
You should be able to just shoot the paint right on the wall . Depending on how long it has been painted. You might give it a quick wipe down with a mild was and grease remover.
As far as clear coating .. Only if he thinks there is a chance of that wall getting wet.. than I would just use a semi gloss and give just the art work a couple of light coats.
F

As long as the semi gloss paint isn't to shiny, you should be able to spray right on top of it. If I was going to clear it for protection, I would use something along the lines of an intercoat clear, or if your going with a poly or something more durable, I would use the least shiny (probably a satin) finish. If you only do the image you paint, you will wind up with a hard edge along the clear that will stand out. If you do the whole wall, it will turn that semi gloss white into a nice shiny glossy white that might not fit with the rest of the walls anymore. If you can find a flat intercoat clear, that might be your best bet to give it some protection without making things look out of place. I'm no expert though. I've only done one mural and it is only there for a limited time so I didn't worry about any kind of clear on it. You'll have a blast though... there's nothing like painting on a huge blank canvas!
B

I've done a few murals. What I use is the matte clear from target coatings. Target Coatings Water Based Ultra Low VOC Wood Finishes and Specialty Coatings. The exterior grade polycarbonate clear. You reduce it with water and it will shoot from an hvlp. Under no circumstance use a roller....(brings back nightmares I tell ya). They have gloss, semi gloss and matte.
F

Thanks for the info


fbsketcher said:
I was asked to paint some walls for a customer, semi gloss walls. How to prep them? and when I'm done do I clear the whole wall or just the image. He is looking for a yin yang and some kanji on another wall. Do I need to sand the walls or just light coat them? I'm using createx and spectra tex.

Thanks guys and glad to join a forum with other brushers, I am an absolute loner way out here in my neck of the woods and only have onliners to talk too.
Click to expand...

I usually work on smaller stuff or on items that I know the routine of waxn grease, sand , shoot etc,.
But this is the first time doing a mural on a pre painted wall. Done large canvas .
In between , colors do I need to inter coat if I plan on using friskets. I know autoair wont lift 99% of the time from a hard surface, but I'll be using createx on this project.

I'll probably rattle can the clear with a semi gloss rustoluem or krylon. probably get like a fade out to the non mural area.

Thanks for all the input .

Can everyone who responds post a sample of their stuff, I'd love to see it. 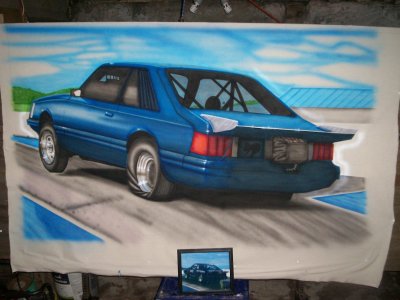 Mural on canvas.
A

If I start on a freshly painted wall I do no prep, but if the wall paint isn't pretty fresh, then I'll wash the wall with warm water and maybe a drop or two of liquid dishwashing soap like "Dawn" to help remove any grease or oils. From that point I'm ready to paint. When I'm done I normally don't need to clear the mural, but in the case of the restaurant murals we did clear those by rolling on a clear polyurethane....But as noted by someone else, rolling on a clearcoat over your artwork can cause problems by lifting your artwork...fine oversprays are the first to lift, but heavily appled areas don't seem affected as much, but if I have to clear anymore murals, I'll probably spray those using a full size paint gun or an airless gun.....I've also applied Future acrylic floor finish as a final clear coat with great success, but I applied it with a large sponge brush over mostly automotive paints and didn't have any lifting issues whatsoever. But over waterbased acrylics I'd still be carefull with it. Most of the following murals were painted with waterbased acrylics, but sometimes I used SG100 mixed with kandy kolors to get the color I wanted, as in the case of the monotone color murals....thats sg100 intercoat clear mixed with red iron oxide toner from PPG.

The bike mural is painted on a cinderblock wall, and was a major pain in the you know what.....The mexican restaurant murals and the Ratfink style and 4 wheeler mural were painted on relatively smooth drywall....the Branding Iron mural was painted on a heavily textured drywall surface that caused all kinds of overspray issues simular to what I fought when dealing with the cinderblock wall, but all in all they turned out looking ok.

I start on a mural for the local RC flying club in the next week or so....I'll post some pics once I get going. 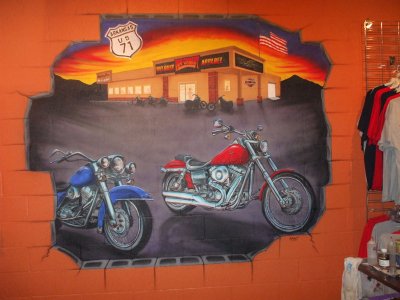 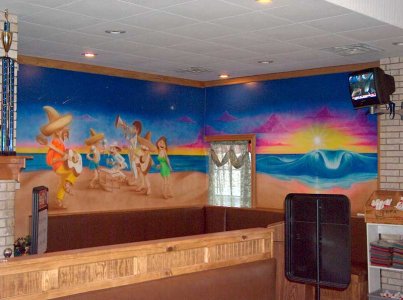 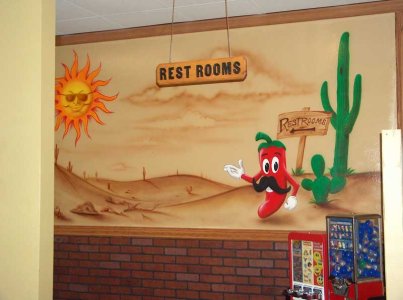 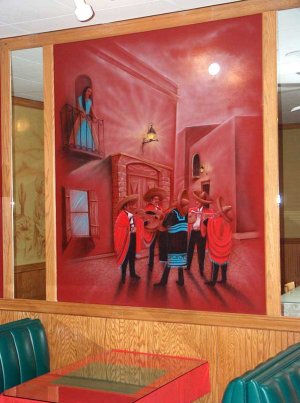 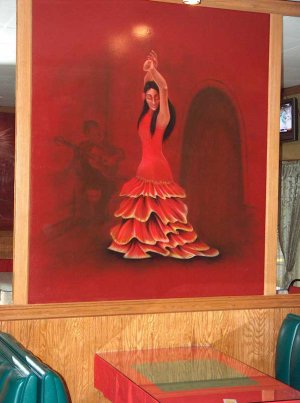 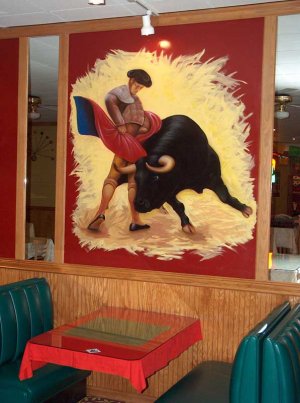 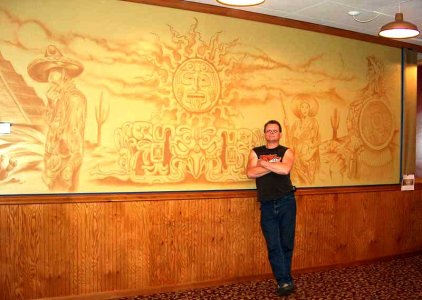 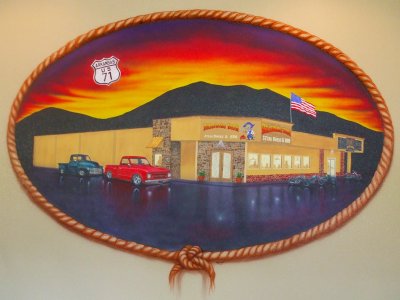 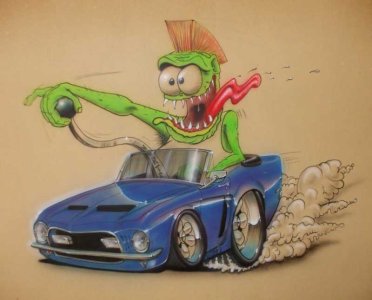 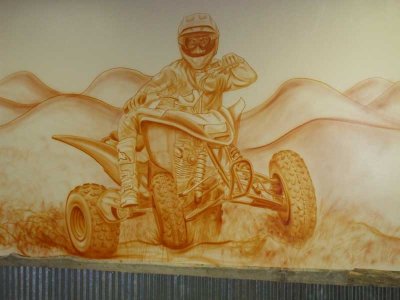 This is the only wall mural I've done, so I'm no expert, but it came out pretty cool 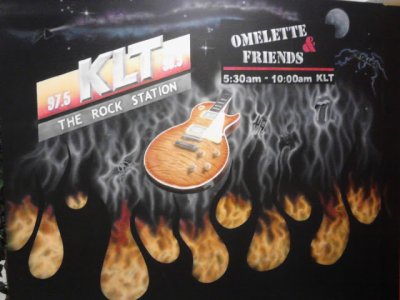